The History of Louny

The first city foundation called Redintuinum took part in the 2nd century proved on Ptolemios`map.Part of the settlers moved westward and made way for Slaves. In the 12/13th century Germans resettled again. The city was founded in the 12th century (the first known written record dates from 1115). The Church of St Peter stands on the site of the original fort. The original name was Luna, which is retained in the name of a local park, Pramen Luna, and accounts for the Moon as part of the town's emblem. The town developed and expanded during the reign of Ottokar I of Bohemia, although the Thirty Years' War depopulated the city. The second half of the 19th century witnessed the economic growth of the area.Until 1918, LAUN - LOUNY was part of the Austrian monarchy (Austria side after the compromise of 1867), in the district of the same name, one of the 94 Bezirkshauptmannschaften in Bohemia.

The town lies on a railway junction and a factory for overhauling railway engines and rolling stock was established in 1873 which became a major employer and contributed to the town's expansion during the early 20th century. The former state company has now been privatized, but remains the town's largest employer with a workforce of 750. 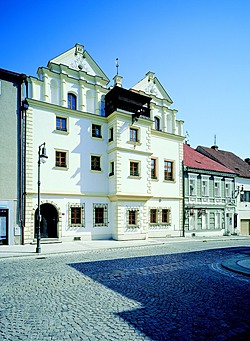 Other industries include a brewery (from the hops which are grown in the region) and a factory making porcelain electrical insulators for power cables, etc. The town's architecture was formed mainly in the 19th and 20th centuries when many old buildings were torn down.

Nevertheless, the most important architectural feature is Roman Catholic St. Nicholas Church, erected between 1517 and 1537 in the late Gothic style. The first written records mentioning the existence of a parish church in Louny date back to 1332 – time, the church was still dedicated to Saint Cross. In the 1380s it was rebuilt and named after Saint Nicholas. The sixty-meter-high tower is the only part of the original church that is now visible and was preserved. In the Middle-Ages, the second floor of the tower plays an important role as the town councilors stored here the most valuable charters of privileges, keeping them in oak chests which have remained well-preserved even today. Above the belfry with its five bells, and the level with the tower gallery, is a watchman´s chamber.

In March 1517, the church and the whole inner town were destroyed by fire, leaving nothing but the tower. Two years later, local inhabitants asked Benedikt Rejt (sometimes spelled Ried), the famous royal architect for help. In 1338, a new  three-nave church was erected on the grounds of the original one, employing a magnificent circular vault, a revolutionary architectural element at the time. 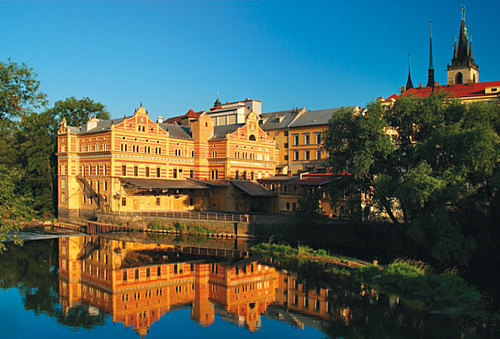 The roof of the Church is also unique. Its sharp-pyramid shape bears a striking resemblance to the picturesque peaks of the Czech Middle Mountains. The interior is dominated by the monumental carved altar made by Jaronym Kohl and Frans Preiss, the church benches and gothic pulpit from 1540, displaying a blind tracery decorated with trefoils and lilies. On the balustrade surrounding the choir loft is the coat of arms of Louny, showing a moon and a star. The beautiful organ, contained in a pseudo-Gothic case, was designed in 1887 by Emanuel Stepan Petr, an organ manufacturer from Prague. At about the same time, the church went through an intensive reconstruction curried out by renowned architects Josef Mocker and Kamil Hilbert. Another masterpiece that the church has to offer is a series of fourteen plaques depicting the Stations of the Cross, the work of Frans Charvat from Kutna Hora, completed in 1939. The deep- relief carvings were inspired by the paintings of Martin von Feuerstein, a painter who specialized in Nazareth’s motifs. To enjoy a magnificent view of the royal town and the surrounding peaks of the Central Bohemian Massive, you have to climb about 180 stairs to the church tower gallery. Seeing the medieval town centre from above, you will feel the urge to stroll through its little narrow streets.


The Gothic history and monuments in Louny

Thanks the active trade Louny was one of the most important towns of the Czech kingdom in the 14th century. In the time of the Hussite wars Louny signed the military union together with Zatec and Slany, which made them stronger and opened the chance to conquer many villages, the properties of local monasteries. After the great fire of the historical center and both of suburbs in 1517, the town was rebuilt in very fast and modern way – in the late gothic. This time we call the “golden times” in medieval Louny. In 16th century the church of St. Nicholas was built by the famous architect Benedikt Rejt, the designer of the church of St. Barbara in Kutná Hora and Vladislav Hall in Prague. Nowadays the  church is open for general public and it is the national monument. The disaster came with the soldiers of the Waldstein and the Thirty-years was, when the town was seriously destroyed and many inhabitants died. It took many decades to reset the blossoming society in this town. In the 19th centrury , after the industrial revolution, the town reached finally its old glory and the establishment of the railway started the new profitable era of Louny.

The Premyslid dynasty founded a fortified royal town on the right bank of the Eger. Ottokar I of Bohemia sent the skillful land allocator to design the ship-shaped town with the church on its highest point. The medieval shape we can easily see even today, because the city fortification is preserved till today. The old town had two city gates and eight small gateways facing to the north and south.  The town itself was created by the main square, where the annual markets were hold and the fine network of smaller streets and rues. The city walls and gates were in the years rebuilt and raised, later there were bastions built for the better town protection. The legend, which was known round the whole kingdom, said Louny fortification is impenetrable and there was no chance to conquer the town.  Today we can admire about 1800 m of the city walls from northern and western sides.

The pearl of Louny is the church of St. Nicholas, built in the late gothic style and rebuilt by Benedict Rejt after the great fire of Louny in 1517. This church is a typical symbol of Louny and is visible on many pictures and old seals.  Thanks its tend-shape roof and huge tower it is easy to recognize. From the hill U Spravedlnosti, there is the stunning picture of the church and the Central Bohemian Massive in background.