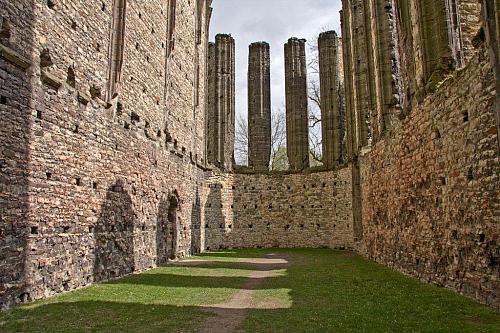 The energy power line makes the    cross-form in       this   church, with its crossing as the strongest point.  That should be known even in the time of Plichta of Zerotin who decided to build the church here. It is said the other building could not resist this natural power and should default the local mystical power.

According Dr. Olga Krumlovská the church is situated on the very strong and powerful natural energy zone, which has very positive effect on your mental depression breakdown, it brings optimism, power and good mood to you. It is very helpful for the people with manio-depression, lack of self-confidence, to whom who tend to commit a suicide. The natural power helps you to improve the healing of your body. We advice you to sit in the middle of the church and spend here any time to heal  your illnesses, as cerebral palsy, stroke and other headaches and illnesses. Go there and sit in a comfortable position with your hands on your knees or lap, with your palms upwards and do sing or growl.

Menhir called “Petrified virgin” or “By the Stone”

The stone, about 135 cm hight, used to be by the local road to Malnice. According the legend the local farmer moved it to his house to create the stony seat in front of his farm-house. But at night it was a very busy place where the dogs gathered and howled, therefore the farmer had to bring the stone back to the field.

It is said the “Petrified Virgin” together with the “Petrified maid” (nearby Rakovnik) showed the exact meridian. Today we can find this menhir in Zatec museum.

Along the road from Drahomyšl to Strkovice, about 400 m northwards from the village edge, we can find the stone which is called “Cursed Monk”. It is said it used to be on the road between Cítoliby and Žatec, somewhere in the fields close to the village of Radomyšl. It is the flat sand-stone, about 2m above the surface. There are any legends about the challenge to bring the stone back to its original place, but without any success. There is also any legend connected with this stone and a girl from Žatec, who fell in love with any young monk. The curse changed the monk into stone and the girl herself was accused of witchcraft and killing-petrifying the monk. She immediately accepted her guilt to avoid any torture. 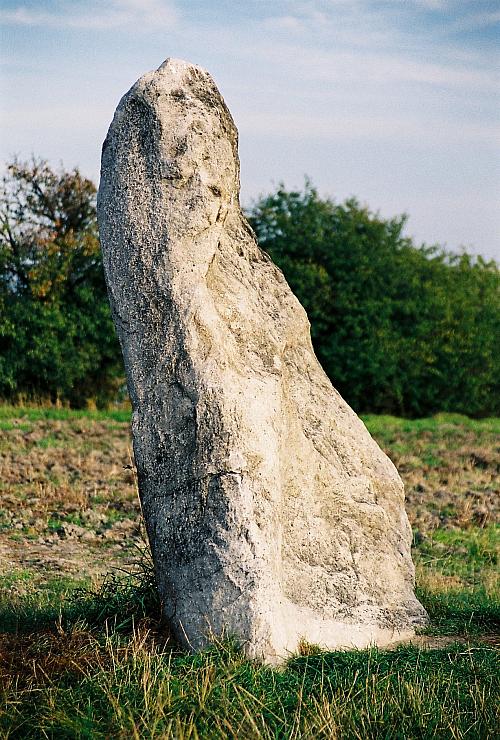 According Mr. Pavel Kozak there is the natural power and 3 space power streams gathering together. The stone has the 0,5m wide ring of protection round itself. There is also the mystic eye, the place of supernatural communication, to do visual records and natural monitoring.

Along the road from Vrbno nad Lesy to Peruc, close to a village Hřivčice,  we can find tiny sand-stone  column with the text “ The old guidepost 1680, National monument institution in Prague”.  We do not know the exact place of this stone but it could be anywhere in the surrounding. What we can see, there is a crack… the column is glued together from two pieces by plaster much later.

There is a theory the stone used to be on the line made of menhir “Stone Bridge” (Kladno district) and Dolní Chabry (Prague 8).

On the road between Telce and Peruc, about 100m far from the local road in the field, we can find the very famous and tallest menhir in the Czech Republic the “Petrified shepherd”. 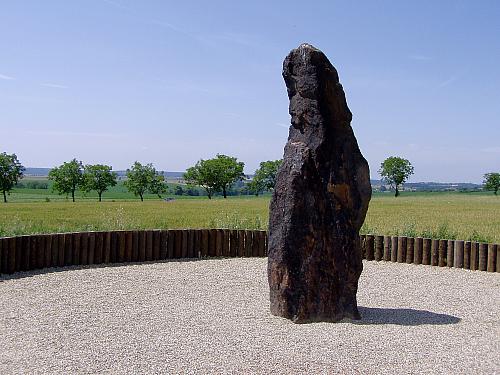 It is about 3m high and 1m wide. In the past time there were 12 smaller stones in the surrounding of the menhir called the herd. According to the local legend – the stone makes one step towards the Klobuky village church every year. What happens when it reaches it, nobody knows!

Ms. Olga Krumlovka said, the stone emanates very strong positive energy. We advise you to lean with your back to the stone, touch the stone with your head and hands (palms to the stone), close your eyes, but face to the sky. If possible – do not think about anything! Then you feel the warmth getting through your hands and body, the soil sucks the negative and unhealthy energy, your legs feel the “stony power” to pull them down. Everything what poisons your body is leaving your body at that moment, and you are recharged by the cosmic power. You can feel the strong relieve of your soul and body.

The menhir is situated on the crossroads of the local roads, nearby the small pond by Slavětín village. It is under an  old linden, not so far from the railway-station Slavětín nad Ohří. It is not so known because it was out of the interest of the local experts and in the 17th century it was known only as the pilgrimage cross. There was the double iron  cross added by the locals, later it was removed, but we can still find the broken top till today. 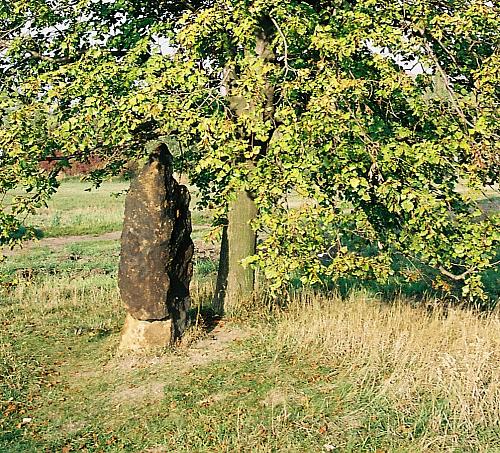 On the border line between Louny and Rakovník district there we can find the “Kounov stone rows” or “Czech Carnac”. It is situated among  villages Kounov, Nečemice, Pnětluky and Domoušice, in the middle of the forest there we can find the unique rows of flint-stones, pudding-stones and sand-stones in a very exact lines. There are 14 visible lines, which are 200-300m long, the longest one is even 350m long. In the southern part of it there are any other two stone rows. It is said there were also big stones placed in the form of a ring as the Cromlech. It is still visible close to the line no. 9. The whole area has about 11 ha, which has no original design and some stones were already replaced. 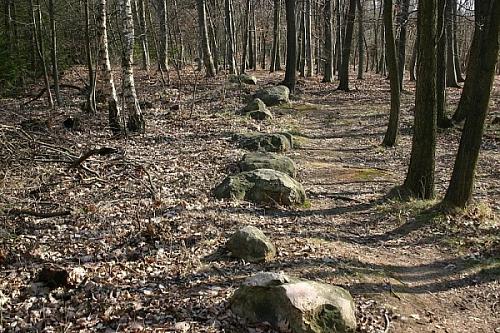 Still, we do not know why the stones were placed here and what the purpose of it was. We are still unable to decode the message of them. There are any theories, of course, like the old Celtic hippodrome, the old field-stones, astronomical clock. Who knows?

We can put the Kounov stone-rows with the lines of Nečemice and Špičák u Klučku in a line. They are really in one line, which makes the west azimuth of the Sun by the Summer solstice. In 1987 there was the educative tourist route open. It is about 2 km long and has 11 educative boards.

We can start behind the Mutějovice railway-station (direction to Kounov), cca 300 m far from the platform.

On the north-west edge, on the local path, of the village we can find the quartzite stone which is 0,8m high and has 0,2t weight and has any supernatural power.